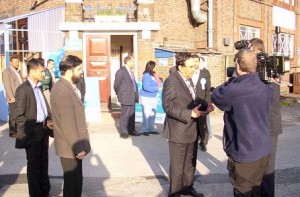 Lord Sheikh attended and spoke at an event held in Luton on behalf of Nigel Huddleston (PPC for Luton South) and Jeremy Brier (PPC for Luton North). Lord Sheikh spoke about what a Conservative government would mean for businesses and the state of the economy. Mohammed Amin was also in attendance and spoke at the event. Before the meeting began Lord Sheikh held several television interviews with ITV and BBC.

Following their speeches, a Q & A session was held in which Lord Sheikh and Mohammed Amin fielded questions from the audience including topics such as why Muslims should vote Conservative.