I have known Bobby Grewal for over 17 years, even before I became a Member of the House of Lords.

I am very impressed by his humility and desire to help humanity and do seva.

Since his election as Chairman of British Charity, which is called India Association, Bobby has raised over 300,000 pounds for Charitable causes.

I remember Bobby doing his great Charity Walk starting from Amritsar going to extreme south of India. He walked 2600 miles for Charity.

I am pleased to say that I was able to render him support.

I was born and brought up in East Africa, but my father came from the great city of Amritsar.

I have found that my family’s connection with Amritsar goes back to 1812.

One of my forefathers was a Minister in Maharaja Ranjit Singh’s government.

This was the reason I wrote a book on Maharaja Ranjit Singh. This book has done very well, and the second print is being done.

All the proceeds from the book are donated to a charity looking after Orphans.

Before the pandemic I used to go to Punjab particularly Amritsar once a year. I find the people of Amritsar are very friendly and hospitable.

When I go to Punjab, I realise how green it is, the land is fertile and there is plenty of water.

Punjab is called the breadbasket of India; it is also called the granary of India.

Vaisakhi is a spring festival; it is a harvest festival when people and farmers want to celebrate the success of their crops.

In addition to Vaisakhi being a spring festival there are three important events we should all remember.

The first one is of course the birth of the Kalsa order by Guru Govind Ji Singh in 1699.

Secondly, it was also at Vaisakhi that Maharaja Ranjit Singh was proclaimed as the Maharaja of the Sikh Empire in 1801. c)

The third event that happened at Vaisakhi is the Jallianwala Bagh Massacre in 1919.

I learnt about what happened when I was young and we of course all know the history, but you will hear the history from a Muslim today.

Guru Govind Singh Ji came out of a tent carrying a sword and said that any Sikh prepared to give his life for his faith should come into the tent.

Five men disappeared into the tent and the Guru came out with blood on his sword, shortly afterward the five men came out from the tent unharmed and wearing turbans.

They became the panj piare and they were the first members of the Kalsa.

They were baptised by the Guru who springled them with Amrit.

The Kalsa movement then grew and flourished, and the practising Sikh’s follow the five K’s.

I have already mentioned that in Vaisakhi of 1801 Maharaja Ranjit Singh was proclaimed as the Emperor of the Sikh Empire.

His closet advisor and Minister was a Muslim who was Azizuddin, his top generals were Hari Singh Nalva and Pran Suk.

In fact, there was a Colonel Sheikh who helped him to conquer Kashmir.

Maharaja Ranjit Singh treated all his subjects equally, 80% of his subjects were Muslim, 10% Hindu’s and 10% were Sikh’s.

I would now like to speak about the Jallianwala Massacre which occurred on Vaisakhi of 13th April 1919.

Two political National leaders were arrested by the British and placed under house arrest.

On the afternoon of 13th April 1919 thousands of Indians gathered in Jallianwala Bagh to protest peacefully against the arrest of Dr Saufuddin Kitchlew and Satya Pal.

General Dyer and his soldiers arrived and sealed of the exists and without warning the troops opened fire on the crowd and shot hundreds of rounds and only stopping the shooting when their ammunition had run out.

It is estimated that 1,500 Indians were killed, and a great number were injured.

British government or any of the Prime Ministers have not apologised for what happened.

The British government may not be able to undo the atrocities which were committed but the least they can say is what happened was totally wrong and it’s about time an official apology is issued.

I together with many others have spoken on the matter and in fact the issue has been discussed in the British Parliament.

We will do all we can to get an apology from the British Government and put a closure to the dreadful event that occurred in 1919.

I have studied Sikhism and I would like to say that what Guru Nanak Dev Ji said has relevance to all the community’s whatever religion you follow.

One of the most essential teaching of Guru Nanak Dev Ji’s was his belief in brotherhood and equality.

He said that everyone is equal irrespective of whatever he may be.

He taught people to work honestly and look after the needy and perform Seva.

He stood for the rights of the women and give them equality.

I would like to say that my father was the President of the Indian Association and I used to go with him to Gurdwara’s.

I have been taught to respect all religions which s what I try to do. I believe that we are children of one God, our approach to God is different. 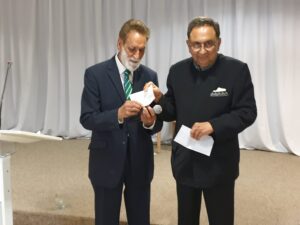