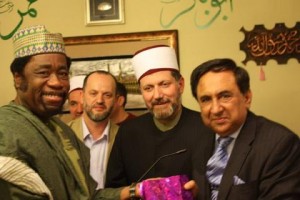 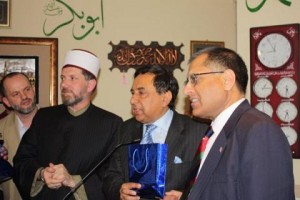 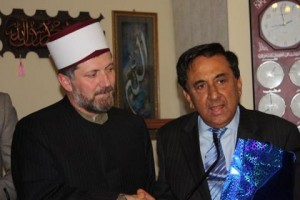 Lord Sheikh was the Guest of Honour at the Eid Milad-un-Nabi event organised by Sheikh Zymer Salihi of the Kosovo Islamic Centre. The event was being held to celebrate the birthday of the Holy Prophet (peace be upon him). Over 200 persons from Kosovan and other communities attended the event.

Lord Sheikh paid tribute to the hard work and efforts made by the Kosovans in building the mosque and Islamic Centre. Lord Sheikh also spoke about the true message of Islam and quoted Hadiths and excerpts from the Holy Quran. He made the comment that his experience of dealing with the Kosovans was that they were very warm-hearted and hospitable people.

He acknowledged the considerable achievements they have accomplished in the United Kingdom. Lord Sheikh was asked to present awards to the Kosovans who have achieved success in various fields. Mohammed Amin (Vice Chairman of the Conservative Muslim Forum) was also in attendance at the event.