As we are now citizens of Great Britain, we need to consider getting involved in political activities both at local and national levels. The best way to do this is to become a member of the governing party. This is the reason why I set up the Conservative Muslim Forum about 14 years ago.  The CMF was established before I was a member of the House of Lords. I was funding the Forum and was the Chairman for over 10 years. I gave up the chairmanship as I wanted to go into writing and undertake more community work. I have been elected the President of the Forum and I have been closely connected with its activities.

We held our Annual General Meeting last Friday. Faruk Miah MBE has been elected Chairman of Conservative Muslim Forum with a very large majority. Faruk was preciously the Secretary and has been a member of the Party and the Forum for over nine years. Faruk will be speaking later and he is indeed a man of vision and has a great deal of enthusiasm.   He is also a man of ideas and has very good interpersonal skills. I am sure he will make a very good Chairman.  All the other office bearers and members of the Executive committee have been duly elected.

The CMF is a robust body and we have members and supporters from all over the country.  The membership of CMF is open to anybody, irrespective of race, religion or colour.  The Executive Committee meets regularly, and the Forum does often hold meetings and events.  We do have a constitution and have several objectives, but I would just like to refer to four objectives which are as follows:

CMF members play an active role across the country to support the Conservative Party whenever and wherever we can.  Members of CMF were actively canvassing for the Party in different parts of the country at the general election.

Conservative Muslim Forum has a branch in Peterborough. Since 2017, Conservative Muslim Forum Peterborough has undertaken a range of activities including providing campaign support to Paul Bristow MP in the recent general election who won with 46.7 percent of the vote.  I recently attended an event hosted by CMF Peterborough for Paul to congratulate him on his victory and to promote the Party in Peterborough. Paul Bristow was going to attend this event but unfortunately, he is not well and we have received a text from him that he is unable to travel to London.

We are in the process of establishing other branches of the CMF in Birmingham, Manchester and Scotland. We aim to continue achieving our objectives and support the Conservative Party at all times and undertake campaigning at general and local elections.

As we are all aware, the Conservative Party performed very well in December’s general election. The Party now holds 365 seats in the House of Commons out of a total of 650, giving the Conservatives an overall majority of 80 seats.  This is a strong majority and will certainly help with pursuing the Party’s agenda. As we have now left the European Union, we need to promote trade between the UK and the rest of the world.  I may add that I am actively involved in promoting more trade between the UK and overseas countries and have helped organise trade conferences in London.

I just want to briefly mention the Budget which the Chancellor, Rishi Sunak, delivered on Wednesday. The Chancellor has certainly found his stride in his new role and has delivered a budget with promises level up the country and spend money in areas including: the NHS, further education, housing, research and development.  I also note that there is a serious commitment to responding to Coronavirus with a £30 billion package.   We need to do all we can to keep the country running as we are facing a pandemic. We need to ensure the well-being and health of the people. We need to keep the economy steady and provide help as well as support for people and also businesses. I am confident that the leadership of our Party will do so and as from today, there will be daily briefings held from Number 10.

I just want to briefly mention what the Conservative Party’s objectives are in the course of this Parliament: increase the number of nurses by 50,000;  establish 40 new hospitals; there will be 20 thousand more police officers keeping people safe with more powers to tackle crime; education funding will be levelled across the country to ensure opportunity is spread equally; taxes will be cut for all working people and the National Living Wage will rise to £10.50; better infrastructure including investment in roads and railways in the North and technology will transform the country; the Prime Minister has given the go ahead for HS2 to be built and the first phase will connect London to Birmingham.

I would like to conclude by saying that the country will be safe and stable and will become more prosperous under the premiership of Boris Johnson. Finally, I would like to thank all of you for attending today’s event under some difficult circumstances. Thank you.

Lord Sheikh attended and spoke at an afternoon tea held at the Carlton Club by the Conservative Muslim Forum.

During his speech, Lord Sheikh made the point that he feels the Conservative Party is the right Party for Muslims and it is indeed a one Nation Party and everyone is welcome to join. The afternoon tea was an opportunity for networking and for attendees to consider getting involved in the governing party’s political activities both at local and national levels. 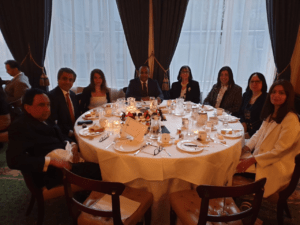 Lord Sheikh spoke at a reception organised by the Conservative Muslim Forum which was attended by a number of politicians and members of various communities. Lord Sheikh explained that Eid is to celebrate mindfulness, self-control and purity.

It is written in the Holy Quran: “O mankind, indeed We have created you from male and female and made you peoples and tribes that you may know one another.” Eid therefore has relevance amongst the Muslim, Jewish and Christian communities. 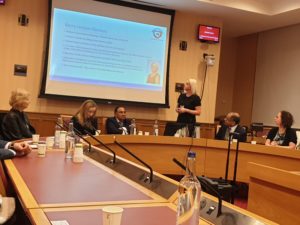 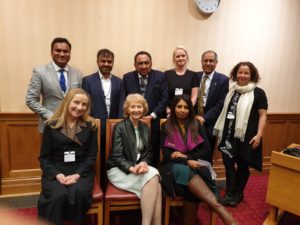 Hosted by Conservative Muslim Forum Executive Secretary Shaheen Thantrey did her bit for the local Conservative Party by hosting the Chipping Barnet Conservatives Brunswick Park Summer Party at her home.

In the photograph below from left to right are: 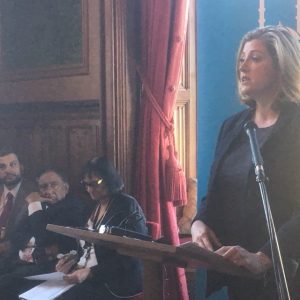 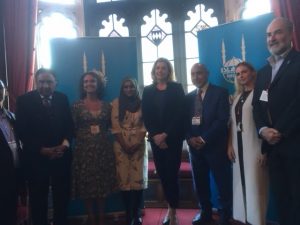 Lord Sheikh travelled to Yorkshire and addressed four separate meetings to promote Islamic values and the work of the Conservative Muslim Forum and also to promote the Conservative Party and support the local candidates in their respective constituencies. 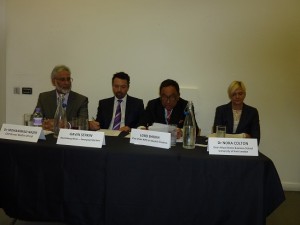 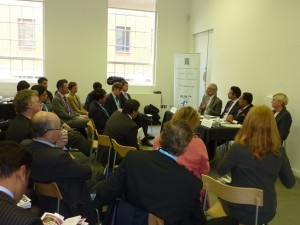 Lord Sheikh, as a Vice Chairman of the Associate Parliamentary Group on Islamic Finance, chaired and spoke at a fringe meeting at the Conservative Party Conference on the subject of Islamic finance. Lord Sheikh mentioned that the United Kingdom is 8th in the Bankers League with Shariah compliant assets in excess of 18 billion dollars which is highest amongst all Western countries. 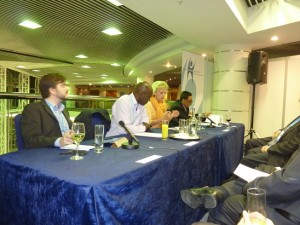 Lord Sheikh was one of the speakers at the fringe meeting discussing the question “Is the UK a Christian country?” Lord Sheikh argued that the UK is a Christian country but one of the unique features of this country is that all religions are accepted and the community is diverse which enriches the country. He further made the comment that in the United Kingdom there are over 1,200 mosques and numerous other places of worship of various religions and there is a respect of beliefs of other people.