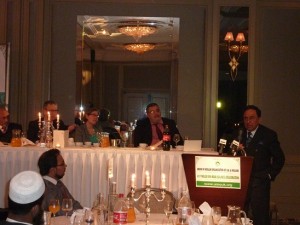 Lord Sheikh attended the Eid Milad-un-Nabi dinner organised by UMO (Union of Muslim Organisations in the UK & Ireland). In his speech Lord Sheikh paid tribute to the late Dr. Pasha, founder of UMO, who unfortunately passed away recently.

Lord Sheikh also stated that over the last four years Dr. Pasha had invited him to attend and speak at the annual dinner held by UMO and he would be sadly missed. Lord Sheikh referred to Dr Pasha as a true warrior who had over the years tirelessly worked to promote the Islamic values and convey the true message of Islam.