The conference was very well attended.

Lord Sheikh spoke on the subjects of banking and insurance. He referred to the bilateral trade relationships between the UK and Afghanistan and spoke on the development and establishment of Islamic Finance and Insurance activities in Afghanistan.

Lord Sheikh spoke of his background in the financial services and noted the good relationship the UK has with Afghanistan. He encouraged attendees to support Afghan trade, especially in light of Brexit. He appreciated that more needs to be done to encourage a strong business environment in Afghanistan and improve issues relating to security.

Lord Sheikh advised that he co-chairs the All-Party Parliamentary Group on Islamic Finance in the British Parliament which is a robust Group with a lot of support. He also stated that London has the largest Islamic finance market outside the Muslim world and has assets of Islamic finance which exceed $20 billion. Therefore, the UK can play a vital role in the establishment and expansion of these activities in Afghanistan in a number of ways.

Lord Sheikh concluded by stating that he hopes that the conference will be productive and that the UK and Afghanistan can work together to promote more business activities in all walks of life and attract investments into Afghanistan. 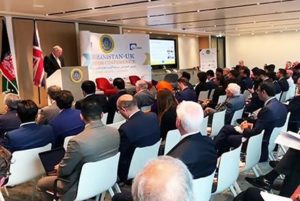