Purnima Raval was was the first Hindu woman Police Officer for the Metropolitan Police Force. Purnima has adopted Lord Sheikh as a brother and every year she ties rakhi which is a thread around Lord Sheikh’s wrist to signify the adoption of a brother. This is a very old Indian tradition of great significance. 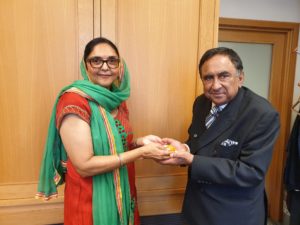