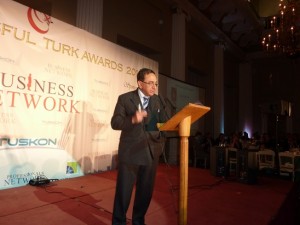 Lord Sheikh was invited to attend, speak and present an award at a dinner to commemorate the achievements of the Turkish community in the United Kingdom. There were several awards presented to the most successful Turks in various categories and Lord Sheikh was asked to present the award to the Most Successful Financier. Lord Sheikh in his speech said that he was a friend of the Turks and over the last year he has visited Turkey as well as the Turkish Republic of Northern Cyprus.

He is very much interested in the Ottoman Empire and Turkey not only has a glorious past and is also a vibrant country which is doing well in the present economic climate. Lord Sheikh also said that he supports the entry of Turkey into the European Union and that there be an equitable settlement in regard to the problems in Cyprus. He praised the achievements of Turks in the United Kingdom who have done well and not only created wealth but generated employment.