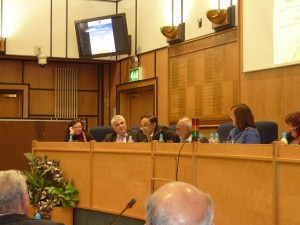 Lord Sheikh attended and spoke at the Inaugural Interfaith Conference organised by the Merton Muslim Interfaith Forum which is chaired by Mr Mohammed Rana who is a member of the Executive Committee of the Conservative Muslim Forum. The event was also attended by religious leaders of the Jewish and Christian faiths, the Mayor of Merton and leaders of the Merton Council.

In his speech Lord Sheikh mentioned that according to Islam, the Jews, Muslim and Christians are people of the Book and furthermore there are similarities between Islam and Sikhism. In the Holy Quran, the names of Jesus and Moses are mentioned more times than Prophet Muhammad (peace be upon him) and there is also one chapter on Mary Mother of Jesus who is called Bibi Maryam in Islam.