ENGAGE Meeting in Houses of Parliament 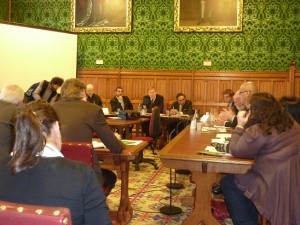 Lord Sheikh hosted a meeting for ENGAGE in the House of Lords when Lord Sheikh spoke about the need to convey the true message of Islam in the United Kingdom and to promote harmony between the various racial and religious groups. Lord Sheikh also commented that sometimes differences arise because of misunderstandings and it is therefore important that we should all be involved in explaining the principles of Islam in a quiet and gentle way and endeavour to dispel misunderstandings.

Lord Sheikh also said that he is very active in the House of Lords speaking on a number of subjects and that he does not confine himself to speaking on only Muslim issues.