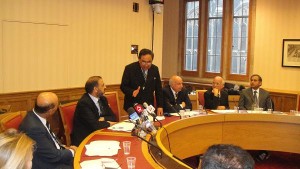 Lord Sheikh spoke at a meeting held in the House of Lords to remember the death of Mrs Benazir Bhutto, the former Prime Minister of Pakistan who was assassinated whilst campaigning for democracy in December 2007. Lord Sheikh expressed his support for democracy in Pakistan and emphasised the need to strengthen the institutions and the need to combat terrorism in that part of the world. Lord Sheikh also said that he recently tabled and led a debate on the Commonwealth and that all the Commonwealth countries are democratic and it is vital that democracy prevails in Pakistan.