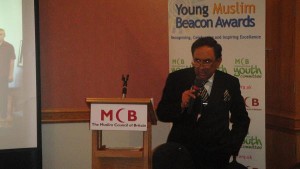 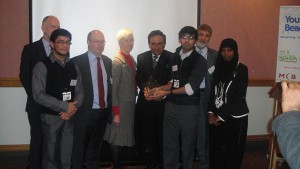 Lord Sheikh co-hosted and supported the MCB Young Muslim Beacon Awards event which was held at Westminster House. Lord Sheikh in his speech stated that it is important for us to recognise the achievement of the Muslims who have excelled in different fields in the United Kingdom. Lord Sheikh also said that the Muslim youth have to try to reach for the sky and the difference between being ordinary and extraordinary is the word extra. The Muslim youth therefore need to endeavour to attain that extra factor. He referred to his own life where he started with a company as an employee and ended up being the Chairman and Chief Executive and the majority shareholder of that company. Lord Sheikh then presented an award to the winner of one of the categories.