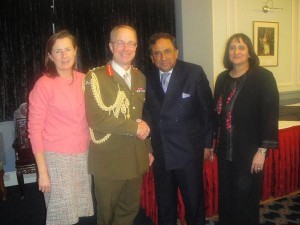 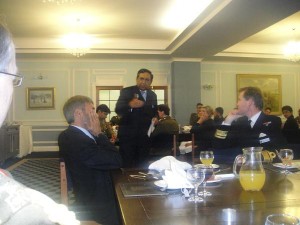 Sir David Richards, Chief of Army Staff, launched the Armed Forces Muslim Association at the Officers Mess at RAF Northolt. The office-bearers are as follows: Chairman – Group Captain Zahur Ulhaq, Secretary – Corporal Mohsin Ali, and the Imam is Asim Hafiz. Sir David Richards is the patron of the organisation who supported the formation of the Association. Rear Admiral Amjad Khan was also in attendance as were a number of high-ranking officers.

Lord Sheikh attended the event and in his speech he referred to the sacrifices that the Muslims had made during both World War 1 and World War 2 and made the point that in the United Kingdom, the Armed Forces are non-political and he urged the Muslims and ethnic minorities to consider joining the Force of their choice. During his discussions with Sir David Richards, Lord Sheikh was assured that the culture now in the Armed Forces is that promotion for any person would be based on merit. Lord Sheikh in his speech said that he was pleased to hear this as Muslims and ethnic minorities were not asking for any positive discrimination but to be treated fairly and on merit.