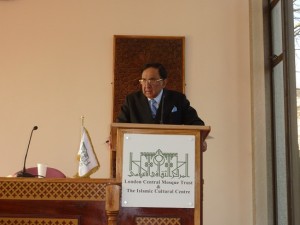 In his speech Lord Sheikh spoke about how Muslims have integrated into the community here in the United Kingdom referring to a survey that was published in the Sunday Times showing Muslims to be more patriotic than the rest of the population. Lord Sheikh went on to speak about the demonisation of Islam in the media and the need for the media to act in a responsible manner and avoid the use of inflammatory language.

Lord Sheikh referred to the Exhibition and spoke about the history of Islam as well as mentioning the Hajj Exhibition that is currently being held at the British Museum. Finally he mentioned how each person needs to spread the message of peace in order to help promote peace and harmony.