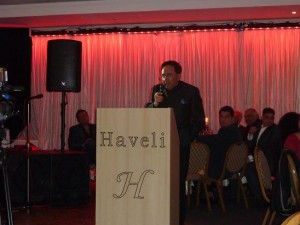 Lord Sheikh was the chief guest at the Diwali function which was organised by Bobby Grewal, Chairman of the India Association. In his speech Lord Sheikh mentioned that the festival of Diwali had significance for all of the communities as it commemorates the victory of good over evil, light over darkness and hope over despair.

He also appreciated Bobby Grewal’s activities to raise money for charity as he walked 4,100km from Amritsar to Kanyakumari in India which raised £180,000. He also undertook a charity walk from Scottish Parliament to the Houses of Parliament, Westminster which also raised a significant amount. Lord Sheikh made a contribution to the charitable causes.