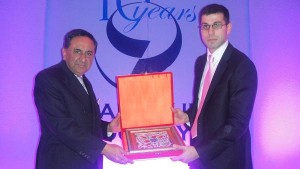 Lord Sheikh attended a dinner organised by the Dialogue Society to commemorate their 10th anniversary. The dinner was very well attended and guests included a number of British Parliamentarians and community leaders. Lord Sheikh is in fact a member of the Advisory Board of the Dialogue Society which is actively involved in promoting peace and harmony between various racial and religious groups.