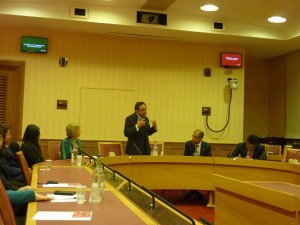 Lord Sheikh hosted an event for Conservative Muslim Forum Women’s branch entitled “Women: Empowerment and Political Representation”. The Rt. Hon. Justine Greening MP was scheduled to speak at the event but unfortunately was unable to do so as she was ill. Andrea Leadsom MP who is the Economic Secretary to the Treasury was fortunately able to attend instead and spoke about her experiences in politics.

Lord Sheikh said that he believed in the empowerment of women and at one time he was a visiting university lecturer and he found that his female students were very focused and determined and their achievement was better than their male counterparts. Lord Sheikh also appreciated the work Andrea Leadsom has undertaken on Islamic Finance as he is involved in Islamic Finance and in fact is the Co-Chair of the All Party Group on Islamic Finance.