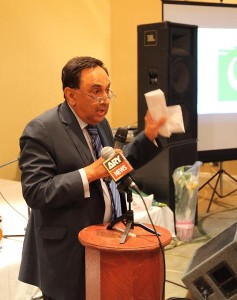 Lord Sheikh attended the dinner organised by Cllr Mohammad Bhatti who is a member of the Conservative Muslim Forum Executive Committee in aid of the flood relief efforts in Pakistan.

Lord Sheikh in his speech referred to the fact that the floods have had a devastating effect in the lives of nearly 20 million people. People have been killed and their houses, crops and infrastructure has been damaged.

The immediate necessity is to provide emergency relief which will have to be followed by assistance in the rebuilding process. As a result of the floods there is the danger of an outbreak of cholera and some people, particularly children, have suffered from diarrhoea, skin diseases and with the stagnant water which is trapped in certain areas, there is also the danger of the spread of malaria. Lord Sheikh made a donation and the event was extremely well supported by the efforts of Cllr Bhatti and other organisers. A total sum of £40,000 was raised.

It was stated at the dinner that some of the organisers will themselves travel to Pakistan in order to ensure that the relief is undertaken effectively and in the proper manner.