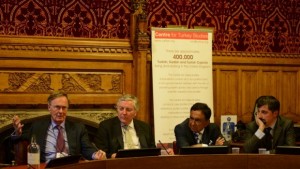 On Tuesday 7th May 2013, The Centre for Turkey Studies held a Westminster Debate on ‘Foreign Policy of Turkey during the EU Accession’ where Lord Sheikh was one of the keynote speakers.

The keynote speakers examined Turkey’s foreign policy regarding the brutal conflict in Syria, Turkey’s relations with its neighbours and Israel, Turkey’s stance regarding the EU accession process, and Turkey’s political manoeuvres and financial advancements in the region and beyond that have taken place in the last decade. The discussion was informative and comprehensive thanks to the speakers’ distinctive perspectives.

The discussion was concluded with a question and answer session in the packed committee room.