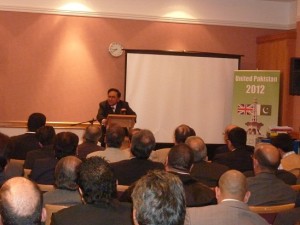 Lord Sheikh spoke at an event held at 7 Millbank, Westminster, to promote the exhibition which is being held in Manchester encouraging investment in Pakistan. Lord Sheikh stated that there was potential for more trade between UK and Pakistan. Trade between the two countries is currently worth nearly £1.9bn and the Prime Minister has predicted that the trade will go up to £2.5bn.

The British Government is keen to build bilateral trade relations between UK and Pakistan and there are already over 100 British companies with a large presence in Pakistan. Trade between the countries covers a variety of goods. Pakistan’s exports to the UK include rice, spices and textiles and UK exports to Pakistan include pharmaceuticals, machinery and financial services.

Lord Sheikh mentioned that there is a large Pakistani diaspora in the United Kingdom and urged them to think of investing in Pakistan and said that trade is a two-way traffic and benefits both countries.