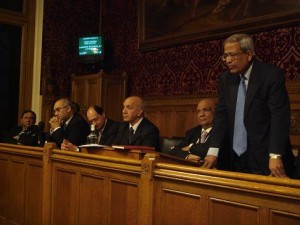 There was a Rememberance Meeting held in the House of Commons for the victims of the despicable attacks of terrorism in Mumbai. In attendance were the Indian High Commissioner, Shiv Shankar Mukherjee and a large number of MPs and Peers (including Lord Sheikh).

The Chairman, Lord Sheikh and the Executive Committee of the CMF would like to express our horror and shock at the atrocities committed by terrorists in Mumbai last week. We would like to express our deepest condolences to everyone who has been affected by these abominable attacks committed by people who have no regard for humanity and the value of the lives of others. We totally condemn such actions and in fact any other act of terrorism committed anywhere in the world. Unfortunately terrorism is a global problem and everyone must work together to fight any form of extremist activity.

Our hearts and prayers go out to the people of India and other countries who have been affected by these terrorists.

The CMF is totally against any form of terrorist activity and will continue to combat any act where human life is in any way affected. We take the view that these acts are in fact against humanity in general.

Islam is a religion of peace and a person committing any form of terrorist activities has put himself outside the religion. Indeed it says in the Holy Quran verse 5.32 that taking one innocent life is like taking the life of all mankind.