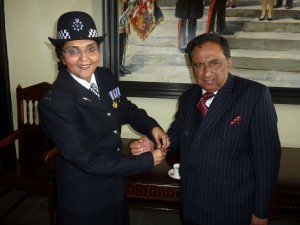 Lord & Lady Sheikh attended the Saragarhi Day at Sandhurst. On the day Purnima Raval, his adopted sister who is a Metropolitan police officer at the House of Lords tied a Rakhi on Lord Sheikh’s wrist to reinforce her sisterly connection with Lord Sheikh. Purnima Raval is a Brahmin lady and in fact Lord Sheikh’s father had been adopted as a brother by a Brahmin lady many years ago. It therefore runs in his family. Lord Sheikh is very keen to build harmony and peace amongst all the communities and he appreciates his adoption as a brother by a Hindu lady.