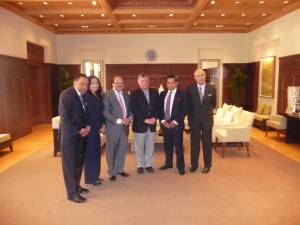 Between the 27th–31st May 2013, Lord Sheikh led a cross-party delegation of British Parliamentarians to the Hashemite Kingdom of Jordan on a personal invitation from His Majesty King Abdullah.

The other members of the delegation were Lord Hameed, Lord Hussain, Lord Ahmad of Wimbledon and Yasmin Qureshi MP.

Over the course of the five days, the delegation met a wide array of senior political figures, including His Majesty King Abdullah, the Jordanian Prime Minister Abdalla Ensour and a range of Government Ministers.

Many issues, both domestic and international, were discussed, with the aim of understanding the challenges facing Jordan.  The visit was also particularly timely given the plight of refugees fleeing across the border from Syria and the worldwide media attention this has received.