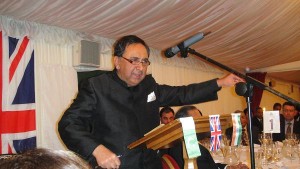 Lord Sheikh is a patron of the Pakistan-India Friendship Forum UK and he attended and spoke at a dinner organised by the Forum at the House of Lords. Lord Sheikh emphasised the importance of people-to-people contact and referred to the speeches by Pandit Jawaharlal Nehru and Muhammad Ali Jinnah at the time of Independence. He also stressed that if there is more trade between India and Pakistan it will lead to a strengthening of relations between the two countries. He referred to the formation of the common market which helped to create friendship and harmony between Germany and France and other European countries after the Second World War.

To see a video of Lord Sheikh’s speech please click on the following link: