On Friday 4th June, Lord Sheikh met with Colonel Mohammad Ghani, for Friday prayers at Ilford Mosque in Greater London. Colonel Mohammed Ghani is now retired, and at 102 years of age is a true veteran. Despite his age he is very fit, both physically and mentally. 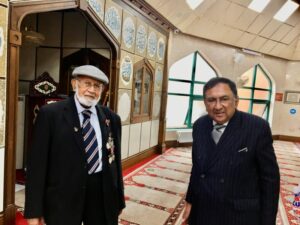 Colonel Ghani is a veteran of World War Two, having joined the British Indian Army in 1940. Colonel Ghani served in the Punjab Regiment, and following his training, was deployed to fight the Japanese in 1941. He was captured in 1942, and kept in a Prisoner of War camp for three years until his release in September 1945, after the Japanese surrendered.

“It will be great to see the vision coming to fruition and finally getting the recognition for Muslim soldiers who sacrificed their liberty for this country and for humanity”.