First Forum of Imams in the UK 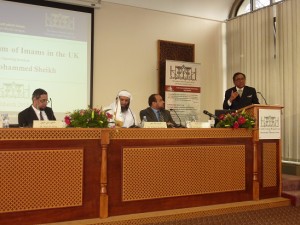 Lord Sheikh made a keynote speech at the First Forum of Imams in the UK at the Islamic Cultural Centre. The audience comprised of Imams and leaders of mosques and Muslim centres from across the country. In his speech Lord Sheikh mentioned that Islam has been criticised in several quarters and that in combating this criticism we must be pro-active and reactive and take positive steps as a community.

Lord Sheikh also mentioned a number of problems which Muslims face including the issues of radicalisation, identity crisis, education standards, empowerment of women, deprivation, low property ownership, grooming by the Muslims, high population of Muslims in prison, Islamic method of slaughter and a lack of integration.

Lord Sheikh mentioned the fact that the true principles of Islam are not fully understood and appreciated by everyone and he outlined a number of ideas whereby the Imams and heads of mosques can play a greater role in explaining Islamic principles and dispel misunderstandings.