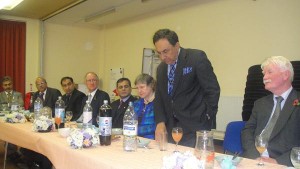 Councillor Mohammad Bhatti, who is a member of the Executive Committee of the Conservative Muslim Forum, held a dinner in Chesham which was attended by a number of judges, Muslim leaders and diplomats from the Pakistani High Commission and the American Embassy. Lord Sheikh attended the dinner and his speech started with amusing anecdotes and he then talked about the three Abrahamic religions and the fact that in the Holy Quran the names of Jesus and Moses are mentioned more times than the name of Prophet Muhammad (peace be upon him). He also made the point that in the Holy Quran there is a chapter on Maryam, Mary Mother of Jesus. He also said that when the Muslims were persecuted in Mecca they escaped to Abyssinia where they were given succour by a Christian king.