Dinner for Orphanages and Schools in Bangladesh in Witney 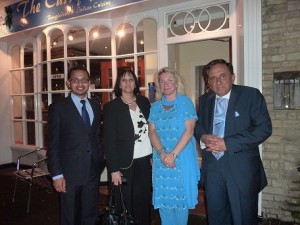 Lord Sheikh attended a dinner organised by the NiinaMaria Foundation in order to raise funds for an orphanage and schools in Bangladesh. Yousuf Miah, who is a Member of the Conservative Muslim Forum Executive Committee, was also involved in arranging the dinner.

During his speech Lord Sheikh thanked Yousuf for the support he has rendered both to Lord Sheikh and the Conservative Muslim Forum. Lord Sheikh referred to the satisfaction people obtain by donating and undertaking charitable work particularly relating to orphans. He made the point that we should support orphanages which look after children irrespective of race, colour or creed.