DMA is a multi-service development consultancy. Incorporated in 2007, the company was established to ‘help money flow into the world’s emerging economies’ through a number of vehicles including investment summits for sovereign governments, through reducing the costs of international remittances and through deepening financial inclusion in emerging economies.

In his speech, Lord Sheikh advocated for more bilateral trade between the UK and Papua New Guinea. Lord Sheikh has spoken about trade with Commonwealth countries in the House of Lords several times and at other meetings. Lord Sheikh made remarks about the trade and investment statistics between the UK and Papua New Guinea and the potential for increased trade in terms of industries including renewable energy and those of natural gas and crude oil. Lord Sheikh cited that he hopes that the conference could contribute to more business being undertaken with and in the country. 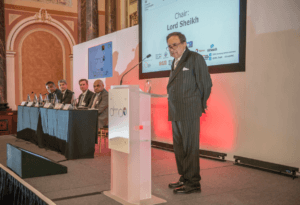