Lord Sheikh attended and spoke at Commonwealth Future’s luncheon for the launch of their ‘2020 Vision’ campaign to promote eye care and the avoidance of preventable eyesight throughout the Commonwealth.

Lord Sheikh was pleased to speak about the Commonwealth having grown up in East Africa and visited a number of the 54 countries. Lord Sheikh has in fact led a debate and spoken in the House of Lords several times on the subject of the Commonwealth as it is an enduring symbol of unity and perhaps the greatest of all international associations.

Lord Sheikh made the point that more can be done to bring Commonwealth countries closer and we need to be innovative and establish new initiatives. One such initiative is the ‘2020 Vision’ campaign by Commonwealth Future.

Commonwealth Future hopes to equalise the standard of Optometry throughout the Commonwealth and help improve vision through the use of optical aids, which are easier in a volume-based population. They wish to emphasise the importance on human prosperity and equality on correcting one’s sight. Lord Sheikh feels that eyesight is of great importance to quality of life and he in fact has his own foundation which supports charities who perform eye surgeries in developing countries.

The luncheon bought together like-minded guests from prestigious backgrounds who are interested in shaping the future of the Commonwealth. 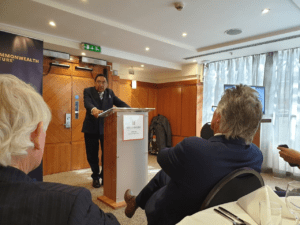