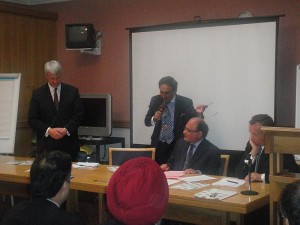 An event was held at 7 Millbank to launch CMF Health which is chaired by Dr Khalid Khan. The subject of the talk was “The NHS under the next Conservative Government” and the format of the function was speeches followed by a Q & A session followed by dinner. Lord Sheikh (Chairman of CMF) was one of the main speakers at the event. Also in attendance were Andrew Lansley CBE MP (Shadow Secretary of State for Health), Mark Simmonds MP (Shadow Minister for Health) and Mohammed Amin (Vice-Chairman of CMF).

Mark Simmonds MP and Andrew Lansley CBE MP both fielded questions from the audience which was mainly comprised of Muslim doctors from various parts of the UK. Mohammed Amin (Vice-Chairman of CMF) said a few words and proposed a vote of thanks.