In light of Russia’s devastating invasion of Ukraine, we have seen national governments across the world shift their focus to the critical issue of energy security and the need to boost energy resilience.

For instance, here in the UK we have announced that we will phase out imports of Russian oil and gas, not only to destabilise Putin’s war machine, but to help us transition to a new clean energy world and a Net Zero future.

Accelerating the UK’s transition to renewable energy is one of the best ways to drive economic growth and protect the British people in this time of crisis.

The UK Government recently released the British Energy Security Strategy which sets out how Great Britain will accelerate the deployment of wind, new nuclear, solar and hydrogen, whilst supporting the production of domestic oil and gas in the nearer term.

This Strategy could see 95% of electricity by 2030 being low carbon.

The Government is also aiming to increase the UK’s current 14 Gigawatts of solar capacity, which could grow up to 5 times by 2035, and are aiming to double our ambition to up to 10 Gigawatts of low carbon hydrogen production capacity by 2030, with at least half coming from green hydrogen.

As a Co-Chair of the All-Party Parliamentary Group for Turkey, I have been extremely pleased to see the plethora of climate policies announced by the Turkish Government in recent months, ranging from a 2053 carbon neutrality target to the development of a National Green Finance Strategy by the end of 2023.

However, the war in Ukraine has highlighted need for Turkey to reduce its dependence on Russian gas imports and accelerate a long-term energy transition to renewable energy.

Perhaps the UK will be able to help Turkey identify the best ways to implement such a strategy, thus building on the fantastic collaboration we have seen between these two great nations in recent months.

For instance, in March we saw the UK and Turkey agree a clean transport deal worth £1.7 billion to finance a new high speed electric railway line in Turkey to decarbonise travel, with major contracts awarded to British and Turkish businesses.

Additionally, last November the UK delivered on pledges made at COP26, announcing over £217 million worth of government backing for the largest solar facility in Turkey.

As Co-Chair of the All-Party Parliamentary Group for Turkey, I look forward to seeing how our nations work together in this time of crisis to boost our energy independence.

I am also eager to see leadership at both the G7 and G20 levels to building a global green economy.

Last year under the UK’s presidency, the G7 collectively recognised the risk of carbon leakage, identifying this as a global problem that requires a global solution.

G20 economies like the UK and Turkey must act to enhance incentives for overseas producers to shift towards green solutions, and the global energy crisis has stressed that the time for action is now.

Therefore, I believe it is clear that leading nations like the UK and Turkey must work together to accelerate the transition to renewable energy and boost our energy independence over the coming years.

There is an urgent need to shift away from dependence on Russian oil and gas and protect our nations, our people, and our economies. 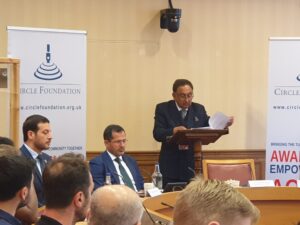