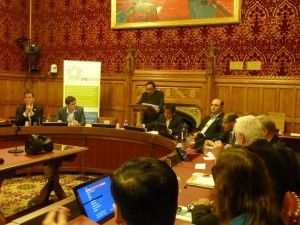 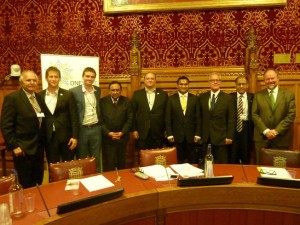 Lord Sheikh hosted an event in the House of Lords for OneVoice which is a grassroots civil society organisation that empowers Israelis and Palestinians to work towards a two state solution. There were several speakers from OneVoice in attendance who spoke about the work that OneVoice undertakes in Palestine and Israel.

My Lords, I thank my noble friend Lady Falkner for securing this debate. Achieving lasting peace between Israel and Palestine remains a significant priority for the international community. I am a believer in arriving at a two-state solution, whereby Israel has a guarantee of security and nationhood but in return must ensure that Arabs are fairly treated and have full independence.

I have visited both Israel and the West Bank with a cross-party group of parliamentarians. While in Ramallah, we had a meeting with Prime Minister Salam Fayyad of the West Bank and with other Arab leaders. We also spent the best part of a day in discussions with an Israeli army officer and senior officials in the Israeli Foreign Ministry. We wanted to hear points of view on both sides. The Palestinians have achieved a great deal in strengthening the institutions and delivery of public services, but there is lack of growth-growth that will of course be attained if they get their independence.

With the new Israeli Government and the re-election of Mr Obama, I hope that fresh efforts can be made to arrive at a peaceful settlement. Will my noble friend the Minister say what positive role we now are playing in the achievement of the peaceful settlement? A strong civil society is viewed as an essential component of a successful democracy. Increased social action through activities of social society organisations is at the heart of promoting tolerance.

There are Jewish and Arab people working towards achievement of a peaceful settlement. I organised a meeting, which was addressed by both a Jewish lady and an Arab lady. The remarkable point about the Arab lady is that several close members of her family were killed following the invasion of Gaza, but she bore no grudge against Israelis and talked about peace.

Several organisations in the region are doing amazing work. However, due to time constraints, I will focus on the efforts of two in particular. The YaLa forum has enabled young people in the region not only to discuss their political concerns but to find common ground in areas such as job creation and women’s empowerment. The YaLa peace conference, which took place in January 2012, was the first ever online conference for young leaders in the Middle East. During the conference, the YaLa young leaders proposed an agenda for peace, which they aimed to achieve through projects in areas, including information technology, e-learning and training. The Palestinian President, Mahmoud Abbas; the Israeli President, Shimon Peres; and the former Secretary of State of the United States, Hillary Clinton, have signed on to the YaLa forum web page with messages of support.

The OneVoice Movement focuses on ending the conflict by the establishment of two states. Recently, OneVoice Israel campaigned during the Israeli elections on the importance of citizens opting for moderate candidates who are committed to a two-state solution. OneVoice Palestine is the second-largest youth movement in Palestine. Last year, it led a rally of hundreds of citizens through deserted lands to the east of Bethlehem to plant a foundation stone for a peace park to be built in the future. OneVoice Palestine has recently started a programme to educate and empower women from towns and villages to become leaders in their communities.

In yesterday’s debate on the Council of Europe in your Lordships’ House, we spoke of the merits of local democracy and the importance of local and regional authorities. It is also important to recognise that civil society organisations in the Middle East deserve credit for the innovative steps that they have taken to play their part in the quest for lasting peace between Israel and Palestine. Civil society organisations have the potential to assume a greater role in ensuring that the Israeli Government and Palestinian Authority guarantee human rights and equality for every citizen.

I sincerely hope that the international community continues to support these organisations in a constructive manner.

Finally I would like to state that I am a patron of a leading organisation that promotes peace and harmony between the Jewish and Muslim communities. We also discuss political issues affecting the communities