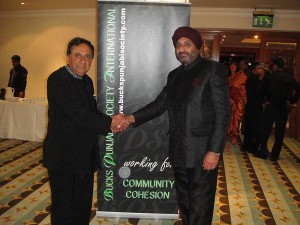 Lord Sheikh attended a dinner organised by Bucks Punjabi Society International. He is a patron of the Society which works for community cohesion and better relationships between different racial and religious groups. At the dinner Lord Sheikh in his speech referred to the strong work ethics and hard work of the Punjabis and their success in the UK. He said that Punjabi was the second most common language spoken in the UK and this language is the mother tongue of Sikhs, Muslims and Hindus.