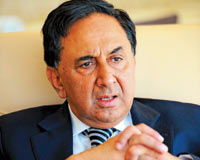 While the global financial system still has not found a departure point for itself, alternative financial structures seem here to stay, says a renowned expert on Islamic banking.

Lord Mohamed Iltaf Sheikh, the founder of the Conservative Muslim Forum who visited Sunday’s Zaman, said that the Islamic banking system, which is based on religious ethics, continues to generate business in many countries, particularly in the Middle East.
Lord Sheikh has set up an advisory and consultancy company to advise interested parties on Islamic banking and Islamic insurance. Sheikh observes that Muslim communities in Europe already constitute a significant economic realm not only by dint of their population but also because of their cultural assets. For this reason, he gives great importance to establishing Islamic banks in Europe based on principles such as transparency and neutrality. He states that in the United Kingdom the Islamic way of doing business has been bolstered as a government policy. The UK is the eighth largest country in the number of Islamic finance and insurance companies it hosts. The British government has already adopted several concessions meant to encourage Islamic banking not only for Muslims but also for the general public. Lord Sheikh pointed out that anybody who acquires a property using Islamic banking principles is exempted from the stamp tax while signing over the property. Lord Sheikh’s vision of Islamic banking is not only about elimination of “riba,” or usury, but also about cooperating and investing in socially and environmentally responsible projects.

Though Islamic banking is the fastest growing financial market in the world, with 30 percent annual growth in banking and 20 percent in the insurance sector, Sheikh believes that Islamic banking will not become a substitute for the conventional banking system. “It is due to the lack of capacity,” he says. “Islamic banks cannot afford to handle huge transactions, for the time being.” But this could change in the near future, given the massive growth in the sector. Sheikh noted the fact that the Vatican has praised the Islamic banking system as an alternative to the conventional understanding of the financial markets. Sheikh thinks that with its population of 70 million Turkey should encourage and invest in Islamic banking, more so than any other country in the region.

Lord Sheikh is not only lobbying for Islamic banking within the capitalist West, but also among Muslim communities themselves. In the realm of insurance, Muslim communities are fairly reluctant to purchase a life or health insurance policy because of a religious belief in destiny. Sheikh has been trying to educate Muslim communities about the kind of input human will should provide for divine destiny to take care of human beings’ needs. He says that their professional advice and expertise in Muslim countries is important for spreading the idea of insurance in those countries.

Thanks to the development of Islamic economies throughout the world, the term “Islamic banking” has gained significant meaning in today’s financial system. Islamic banking activity connotes a typical financial system that operates in harmony with Islamic principles and modes of life. For example, the payment of fees for the renting of money, or “riba,” is strictly prohibited according to Islamic principles. Despite many commonalities shared with conventional banking system, Islamic finance is based on equal sharing of profits and alternatives to riba.

Islamic banks have grown recently in the Muslim world but remain a very small share of the global banking system. Micro-lending institutions founded by Muslims, notably the Grameen Bank, use conventional lending practices and are popular in some Muslim nations, especially Bangladesh, but some do not consider them true Islamic banking. However, Muhammad Yunus, the founder of Grameen Bank and microfinance banking, and other supporters of microfinance, argue that the lack of collateral and lack of excessive interest in micro-lending is consistent with the Islamic prohibition of riba.