Lord Sheikh is a Vice Chair of the All-Party Parliamentary Group for Ethiopia and Djibouti.

The APPG for Ethiopia and Djibouti held a meeting on Wednesday 26th February. The Ethiopian Ambassador H.E. Mr Fesseha Shawel Gebre was in attendance and gave a short update to the Group and talked about the forthcoming General Elections and the reforms which have occurred under the premiership of Mr Abiy Ahmed. Lord Sheikh made the point that as now the UK has come out of the EU, more trade should be established with Ethiopia. The country has many opportunities for trade and investment and the UK should seek to increase and strengthen its economic ties with the country.

The meeting was productive and the Group engaged in interesting conversations. 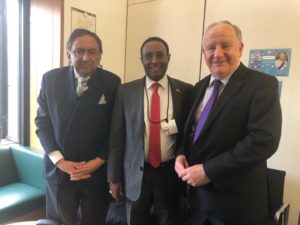