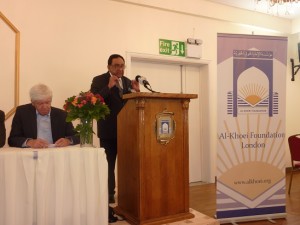 Lord Sheikh spoke at the Iftari and the memorial event organised by Al-Khoei Foundation. He praised the Foundation for the charitable work they undertake and for actively promoting interfaith dialogue. As His Excellency the Ambassador for Bosnia was present and one of the reasons for the event was to commemorate Srebrenica and what happened at that time was a blot on humanity and we must never forget the massacre of the Bosnians by the Serbs. We must not allow something like this to happen again. It was a great shame that the Dutch soldiers who represented United Nations allowed the massacre to take place within the area which they should have protected.