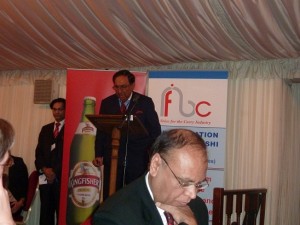 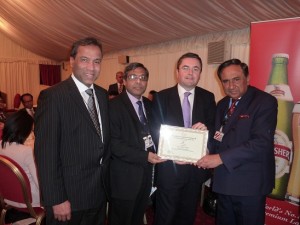 Lord Sheikh hosted a dinner in the Cholmondeley Room and Terrace in the House of Lords for the Federation of Bangladeshi Caterers. Also in attendance at the dinner were the Rt. Hon. Damian Green MP (Minister for Immigration) and the Rt. Hon. Dominic Grieve QC MP (Attorney General). His Excellency Mr Datuk Zakaria Sulong, High Commissioner for Malaysia and J K Sharma (First Secretary of the High Commission of India) were also in attendance. Other MPs included Rushanara Ali MP, Tom Brake MP, Frank Doran MP, Margot James MP and Robert Buckland MP.

Lord Sheikh in his speech welcomed the guests and praised the work that the Federation of Bangladeshi Caterers undetakes in the United Kingdom. He also said that more British people need to take up training in order to try and reduce the need for hiring staff from abroad. He went on to congratulate the winners of the FoBC Awards 2010 who were presented with certificates by their constituency MPs on the night.