The Jallianwala Bagh Centenary Committee met in the House of Commons to discuss the tragic massacre at Amritsar in 1919. The Centenary Committee continue to campaign for an unequivocal apology from the Government and for colonial history to be taught as part of the National Curriculum, among other campaign priorities. Lord Sheikh attended the meeting. 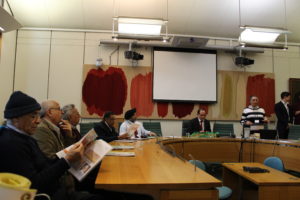 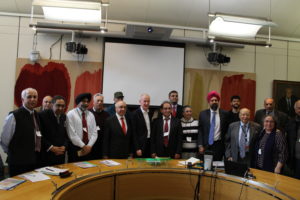 Lord Sheikh’s roots are in Amritsar where his family’s connection can be traced back to 1812. He goes to India at least once a year and he visits Amritsar every time he goes.

Lord Sheikh has been to Jallianwala Bagh where the massacre took place and has seen for himself the bullet holes on the walls in the garden. Being in the place where so many Indians lost their lives and suffered injuries was an extremely moving experience.

Lord Sheikh has spoken about the massacre in the House of Lords and at other events.

The massacre occurred after the First World War. During the war, India provided over 1.3 million soldiers to fight for the Empire and from this number, around 73,000 soldiers died and 11 Victoria Crosses were awarded. The massacre at Jallianwala Bagh took place on the Sikh day of Vaisakhi. People had gathered at the Bagh to protest the arrest of some of their leaders. Brigadier General Dyer ordered his soldiers to block the exits to the garden and hailed fire on the unarmed gatherers until the soldiers ran out of ammunition. General Dyer stopped his soldiers giving any aid to the wounded and did not allow families to tend to the wounded for 24 hours.

In his speeches, Lord Sheikh has noted that the official inquiry conducted by the British authorities say 379 people died, but Indians say the total was nearer to 1,000. Lord Sheikh feels that Winston Churchill, who was Secretary of State at that time, was right to condemn the massacre as ‘monstrous’.

Lord Sheikh believes that the British Government should be magnanimous and issue an apology for one of the most shameful incidents in the British Empire’s history.

Lord Sheikh was part of the commemorations at the Sri Guru Ravidass Bhawan and Community Centre Bedford.

The speeches were followed by a wreath laying ceremony  and a langer.